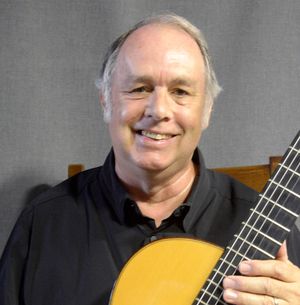 Tom Renaud fell in love with the guitar early in his life, and began playing steadily at age 16. By now he’s racked up over 50 years on his chosen instrument, and has been writing songs for almost as long.

Tom started out as a teacher, but his life took a unique turn. A desire to follow Jesus radically led him to join a Christian monastic community in 1982. He was a monk for 25 years, which had a profound effect on his life and has rooted him in Scripture, prayer and study. He was privileged to live in beautiful wilderness areas at monasteries in Arizona, Colorado, Nova Scotia, and Ireland, which were also retreat centers for people from all walks of life. He offered spiritual counsel to hundreds who made retreats over the years. He also worked with his hands extensively, learning construction, carpentry and woodcarving. And all the while he developed his guitar playing and wrote songs.

As part of his retreat work, Tom traveled around the U.S., Canada and Europe. Everywhere he went, he used his music to communicate with and uplift others. In 1998 he and his friends recorded a CD with Nova Scotian folk duo Evans and Doherty—mostly his originals. It received national airplay in Canada. In 2003 he performed at the Brendan Kennelly Poetry Festival in Ireland.

In 2005 Tom left the monastery. He was married in 2008, and taught high school students in California. He recently retired; he and his wife Lee now live in Florida. He continues to write original songs in the folk tradition, and also has collected a diverse repertoire of solo instrumental pieces for guitar.

Music continues to be his passion and his favorite work. He performs for a wide variety of audiences. His most recent recording is "Witnesses", a song cycle on the life of Jesus.

"Tom Renaud is a Christ-centered man of God who brings beautiful music to our ears and hearts… Not only is he an excellent guitarist and singer but he breathes out peace, serenity, hope and faith through his songs and testimonies of his life."
Rev. Elaine H. Cho
La Canada United Methodist Church, California

"For over twenty-five years Tom Renaud’s music has inspired, challenged, comforted, and spurred me on. We all need companions on our spiritual journeys to give us hope and to point a path forward. I am grateful to Tom and his music for doing both."
Eric Haarer, Monk and Catholic Priest
Spiritual Life Institute, Colorado

"Tom's music is more than entertainment. For the listener it is worship. The sounds from his guitar and words from his lips paint pictures of a relationship with the Lord. I find Tom's concerts to be ministry."

"I found Tom's 'Witnesses' concert to be inspirational and a beautiful blend of scripture and original music. God's hand is surely upon him."

"Tom easily ranks in the top percent of musicians I've hired for being courteous, organized, cooperative, friendly, and for following instructions. Onstage Tom literally "has his act together." I am always confident when he takes the stage, knowing that years of performing have seasoned him. Tom is comfortable with his audience, embracing them as part of the show while at the same time maintaining his control as the performer. His playing is beautiful and never fails to impress."
Dana Charnofsky, concert producer
Los Angeles, California

"Tom Renaud has spent a large portion of his life both as a songwriter and in the contemplative practice of the monastery. The songs that emerge from this background are deep, rich, inspiring, uplifting and as well-crafted as a fine piece of furniture."
Don Richmond, Musician
Alamosa, Colorado